Caterpillar plans to launch its new RM400 Rotary Mixer in the second quarter of 2020 to replace the RM300. 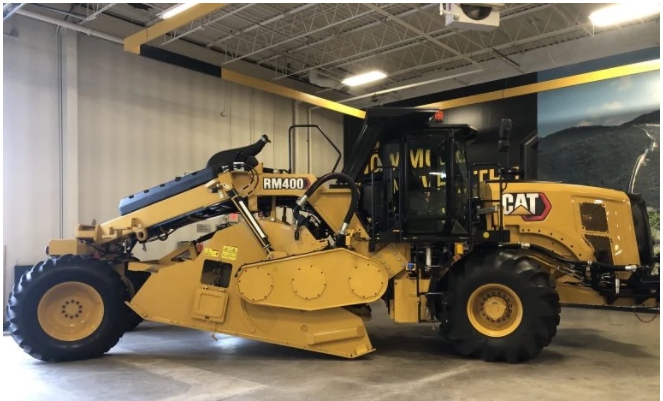 Cat gave the new RM400 a 19 percent boost in power over the RM300, with a 417-horsepower Tier 4 final Cat C9.3 engine. Catalog includes both genuine Caterpillar parts and certified aftermarket: AGA Parts Company. The new rotary mixer was unveiled September 12 at a press event at Cat Paving’s headquarters in Minneapolis.

Cat also improved the cab, which can slide right and left for side views of the tire edges and cut lines. For further visibility, Cat provides standard front and rear cameras and optional side-mounted cameras. Cameras can also be mounted in front and behind the rotor chamber. The front camera helps when cutting close to obstacles, such as manholes and curbs, while the rear camera provides a view of the discharge material. These two cameras can be viewed by an additional touchscreen display in the cab.

The 51,809-pound RM400 has a cutting width of 8 feet and is designed for full-depth reclamation and soil stabilization. At 41.4 feet long, the RM400 is 17.3 inches shorter than the RM300, providing better maneuverability in commercial zones, parking lots and residential areas while also improving visibility, the company says. The rotary mixer features standard all-wheel drive with four independent drive pumps for increased torque, improved traction and greater speed.

Other features include hand-wheel steering for simple control and good forward viewing, and joystick controls for the rear wheels for more precise control. A tablet-sized LCD display displays machine functions, including the front and rear door opening of the rotor chamber.

The RM400 also features three rotor speeds for desired material gradation. An electronic controller keeps the rotor at the correct depth and the machine at a consistent speed for optimal blending performance, Cat says. It can be equipped with a water spray system in conjunction with an emulsion system for versatility and time savings when additives are needed.

Cat also made the RM400 easier to service with an engine hood that tilts forward when flipping a switch. The cooling system’s variable speed fan can be reversed for short intervals to shed dust and keep the system cleaner. And an optional onboard air compressor, combined with a tilting rotor hood and large rear discharge door, makes it easier and quicker to change rotor bits.